The late Joseph Holt’s last wish was that his war medals be returned to his home town, Romford.  With the help of Havering Museum, his family have honored that wish.  His medals and war records are being proudly displayed in the Reception Area.

Joseph Holt’s story is a truly heroic one. He was born in Romford on the 1st May 1924.   In 1940 he survived a bombing raid with minor injuries.  The following year he lied about his age and enlisted with the Royal Air Force Volunteer Reserve.

In July 1943 he completed basic training along with numerous Morse code and advanced wireless training. He was attached to the Royal Canadian Air Force and in October 1943 was posted to 428 Squadron – also known as 428 ‘Ghost’ Squadron.

Holt flew in thirty-six operational flights in Wellington, Halifax and Lancaster Bomber aircraft. In total, he accumulated a grand total flying time of 447.30 hours. This included a considerable number of training flights in-between combat sorties. His first operation was over Dusseldorf in 1943. Other operations followed over other major German and Occupied French cities, including Brest, Berlin, Le Mans and Leipzig.

Holt had made plans to marry his girlfriend Josephine in November 1943, but due to his experiences flying over enemy territory, believed they should postpone their marriage until after the war. Josephine insisted otherwise and they were married on 20th November 1943, with Holt’s Pilot as his best man. Joseph and Josephine Holt were married for sixty-seven years until Josephine’s death in January 2011. 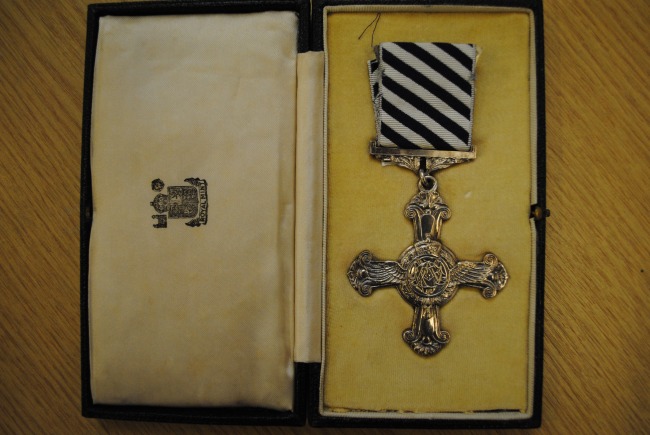 In November 1944 Holt was awarded the Distinguished Flying Cross (DFC). The citation for the medal stated that Pilot Officer Joseph Holt, as Wireless Operator, had completed numerous operations against the enemy in which he had displayed ‘the utmost fortitude, courage and devotion to duty’. Ending his career in the RAF as a Flight Lieutenant, Joseph Holt was demobilized in September 1946. He then joined the police force and later emigrated with his wife to Canada, where he passed away in November 2012.