By Matthew Abel, Exhibitions Team Leader
Havering Museum will be starting the New Year with an exhibition on the 768-year history of Romford Market. The exhibition will feature many objects from the Museum’s collection, including this impressive set of Imperial standard measures.

These measures were once used at Romford Market to check that traders were selling the correct quantities of goods. Traders would measure out quantities of dry or wet goods using their own equipment, and these would then be compared against the standard measures to check their accuracy.

Until 1824, Britain used many different units of measurement, some dating back to Anglo-Saxon or Roman times. Various attempts were made at standardisation but the sizes of units could still differ from place to place. The Weights and Measures Act (1824) standardised the system of Imperial units used in Britain until the Metric system was adopted in the late 20th century. It established an exact size for each unit so there could be no disputes over quantities. However, some pre-1824 standards still remained in occasional use until the end of the 19th Century. 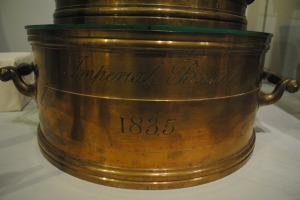 An Imperial Bushel, equivalent to 8 gallons.

Until 1892, regulation of weights and measures at Romford Market was the responsibility of the Clerk of the Market, who reported to the High Steward of the Royal Liberty of Havering. The Liberty was an administrative area covering Romford, Hornchurch and Havering-atte-Bower, established by Royal Charter in 1465. It made these parishes independent from the County of Essex and guaranteed their inhabitants special privileges including freedom from tolls and the right to hold their own courts.

The Clerk of the Market was based in a building at the western end of the Market Place known as Romford Market House, which also housed the Liberty Court and gaol. These measures would have been kept there. 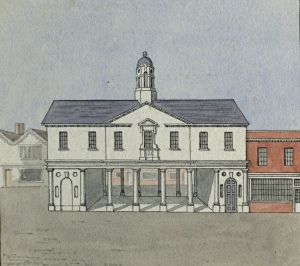 Most of the measures were made for the Liberty of Havering in 1835, and are each inscribed with their size, and the name of Thomas Mashiter (1780-1862), the High Steward of the time. Unfortunately the set is not quite complete – the smallest measure, the quarter gill, is a replacement dating from 1898. Unlike the others, it is stamped ‘County of Essex’ reflecting the fact that the Liberty of Havering was officially abolished in 1892, and that the local area, which had enjoyed privileged independent status for many centuries, now came under the jurisdiction of Essex County Council.

Romford Market: Historic Heart of the Town runs from 10 January to 28 March 2015.